BREEDS THAT HAVE GONE INTO OUR DOGS 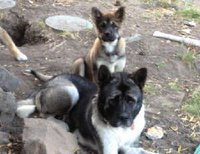 Photo is of AKC AKITA Female. pup was bought for breeding into our lines. Sire was AKC malamute (cough)

I have bred several Akita's into my lines since 1987 and this one was the worst as i was not the one that picked up the pups.
I had a friend in Sacramento that saw an add in the newspaper for Akita x Malamute pups. They went to see them and chose 2 pups, a male and female and brought them to me. I raised them and scored them and only used the male to breed with. There were a lot of health issues that were unseen until the pups came from our first outcrossing.

Our tests are rated 1-10 on our AA standards for companion dog excellent in temperament.

Pitch of/Vocal sounds 8 most had too high a pitch

Prey drive 2 when mature, this breed doesn't care about fetching

Chewing 4 likes to chew as a pup mature, these dogs will chew bones

Swallowing stuff 8 as a pup 10 as an adult

Emotional sensitivity 7 most Akita's don't have the brains nor do they care.

Ease of training for the average person 3

Velcro (not wanting to wander) 3

Sanitation - pooping in the designated spot 9 a clean dog

Digging 1 all the time